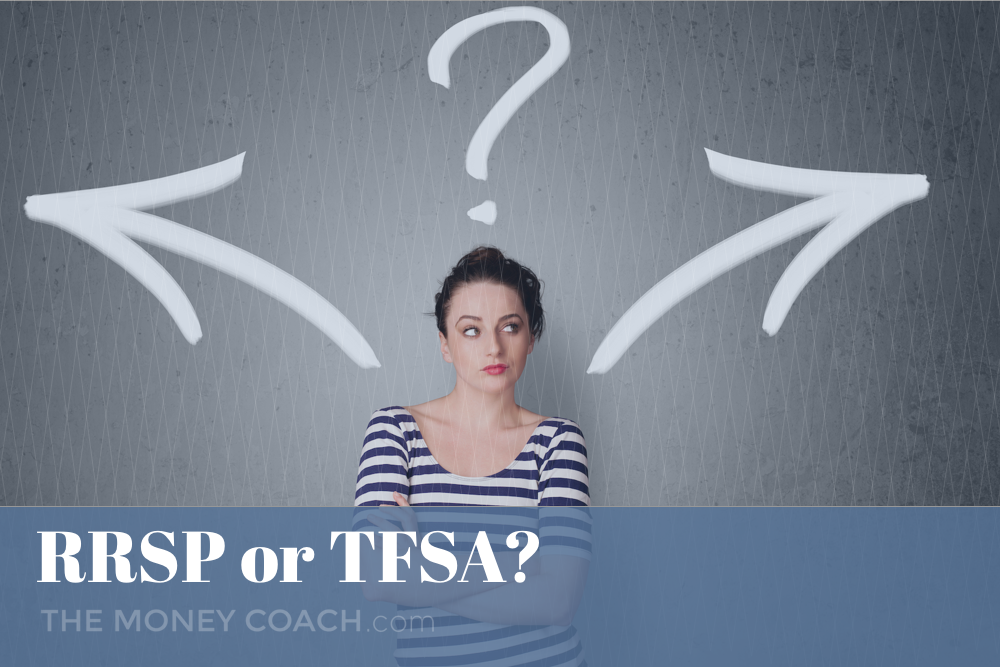 First, let’s take a step back and talk about why this question is even important.

I have a quick question about maxing out your rrsp’s and tfsa.. are those not generally mutual funds managed by a bank with high fees?

…and my answer was:

No, no, but that is a common misconception.

In an RRSP or a TFSA, you can hold cash, ETFs, stocks, bonds, GICs, and yes, even mutual funds. The issue is that when you go to a bank to open a TFSA or RRSP, they will most often sell you high fee mutual funds. That is probably where part of the misconception is.

Which is just to point out that before we get into the differences between RRSP and TFSA, I want you to understand that each starts out as an empty account that you add investments into.

Think of each like a make-up bag, where you are allowed to put any kind of makeup—lipstick, eyeshadow, mascara, bronzer, eyeliner, etc. etc.

…is not helpful to the conversation. While both statements can be true, it is like saying you have a bag that can only hold eyeshadow.

You could throw some other stuff in there if you wanted to. (and if your makeup bag is anything like my make-up bag, you did, and now the bottom is a scary, scary place…)

Also, you can open an RRSP account or a TFSA account in many places: the bank, a fund company, a full-service brokerage, a discount (DIY) brokerage, etc. The investments you put in the accounts are your choice.

OK, with that out of the way, let’s get to the meat of this article (tofu, if you are a vegetarian!)

Let’s start with explaining the acronyms:

An RRSP is a Registered Retirement Saving Plan, and a TFSA is a Tax-Free Savings Account.

Both are provided by the Canadian government as incentives for Canadians to save, primarily for retirement, but the TFSA can also be used for short-term savings (i.e. emergency fund) or mid-term savings (i.e. home ownership or University).

I would say the most important distinction between the two is:

[+] Money that goes into an RRSP is TAX-FREE and money that comes out of a TFSA is TAX-FREE.

Which means, yes, the key is to have a rough idea of what your income is like today, compared to what you expect it might be in 20 – 30 years (I know, I  know—not easy) so that you get the greatest break on your taxes.

Betsy is a 24-year-old graphic designer and is employed by The Awesome Shoe Company. She currently earns $38,000 per year but has been taking advanced Photoshop and Web design courses, with the goal of becoming the firm’s Director of Design.

Betsy has never contributed to a TFSA and so her allowable contribution limit is $52,000**:

So, it’s obvious she should contribute to the RRSP, right?

Betsy needs to consider that she is young and how her future earnings could change over the next decade. For example, if, in the next five years, Betsy’s income grows to $120,000 her marginal tax rate for 2020 could be upwards of 45%.

This example is getting a bit more complicated than I wanted it to be, but my point is that you only get one chance at an RRSP contribution (it is not a finite amount).

As such, it can be best to wait to contribute to an RRSP until you are in a high marginal tax rate. (in Betsy’s case, 45% over 26%)

Pre-2009, this decision had to be weighed against your early contributions not growing tax- free—a compound interest benefit not to ignore. But now, in 2017 your initial funds can grow tax-free in a TFSA, and so the issue is somewhat mitigated.

As her income grows, along with her marginal tax rate, she can start adding to an RRSP.

The tax relief you receive from contributing to an RRSP is only deferred.

You base this strategy on the assumption you have a lower income in retirement.

I explain this in much more depth in my free guide (completely revised and updated for 2017):

But there is no way of knowing at age 24 what your income will be in retirement.

It is entirely possible that you will be massively successful, earning $100,000+ year, and thus still paying 45% taxes on your (forced!) RRSP withdrawals.

In comparison, the money withdrawn from a TFSA is not taxed. You already paid tax on the income used to contribute to the TFSA; you did not receive any tax relief on contribution, and so, therefore, it is not taxed again.

Also, you can continue to contribute to a TFSA up until your death. (versus the RRSP that forces you to not only stop participating but also to start withdrawing at age 71).

All this to say that in a perfect world, you will max out both your RRSP and TFSA contributions early and often (and at a high marginal tax rate for the RRSP).

But since the world is rarely perfect, and if you are not in a high tax rate, my vote is for the TFSA.

For a complete comparison of the RRSP and TFSA, download my free guide: RRSP vs. TFSA: The Ultimate End-All-Be-All Definitive Guide

I say simple calculation because, in reality, it is not that simple. Pension adjustments, carry-forward amounts, varying maximum amounts for previous years, etc. can all affect your maximum allowable amount for any given year. Your annual Notice of Assessment (sent you after filing your income taxes each year) will have your next year’s allowable contribution. You can also call the CRA, and after answering 3,251 security questions (LOL), they will provide it to you.

**This amount is also mandated by the Federal government. The TFSA came into effect January 1, 2009. The allowable amounts for every Canadian over 18 are as follows:

If not used, TFSA amounts also carry forward indefinitely. Meaning, if Betsy (or you) do not contribute in 2017, her (and yours) total allowable contribution will be $52,000.

Enter your email and receive instant access to RRSP vs TFSA: The Ultimate End-All-Be-All Definitive Guide. And Lesson #1 of Investing Bootcamp, delivered immediately to your inbox.